Myka’s story is here in vibrant black and white. The book actually released on 7/13 from Sugar and Spice Press but won’t officially hit Amazon and other third parties until 7/18.

I have to tell ya. I’m a little sad to see the last brother happily mated off. Don’t get me wrong I’m ecstatic that they are now all claimed and good stuff but my guys held a special place in my heart. I mean these men were rugged and possessive and flat out all Alpha. I actually despaired as I started Fangs. I did not want to let these fellas go.

A funny thing happened though as I wrote Fangs. Tee, Myka’s mate introduced me to a whole new world of shifters. I mean she put me out there and I got to party with her Cajun cousins.  Her mama and I had a long conversation about Myka and the woman showed me baby pics. Tee was a cute little snake. Sint added in her 2 cent of course and I about fell out my chair as I wrote THE END.  I didn’t realize I was that lose to even finishing the book.  So many new shifters stopped by to say hi and introduce themselves. It was phenomenal.

As I close the chapters on the Blaidd brothers, I am opening new one into the parish township of Betaille and a few folks are whispering something about an even bigger world. Now I have no clue where this is going but I plan to write it out and see where these lovely people take me starting with Claws. But that is a blog for another day. In the mean time check out Myka and how he tames a pit viper named Tee in Fangs. 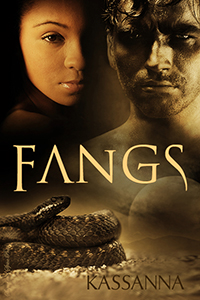 Tee Cottons is the sentinel sent from another clan to help protect the humans of the Volkshire pack. As a guardian, she knows what to do. She’s done it a thousand times before only she never had to deal with a potential mate hovering in the shadows…talk about distractions.

Myka Blaidd is comfortable keeping to the pack’s fringes as Ambassador for Volkshire. Considered the most reasonable of the three brothers, he is efficient in handling volatile situations, and then he meets Tee. Her scent evokes powerful feelings he must deny. With war looming, he has to keep a level head–until Tee is threatened. Now he will show everyone just how deadly he can be because for her he is willing to lose everything.

Myka reached over the driver’s seat and handed Keen the bottle of juice he’d purchased at the rest stop. He glanced over at Tee, her profile stark against the moving landscape beyond the window. The long column of her neck made him want to trace the length of it with his tongue. Her scent had been teasing him for hours and although he’d been angry at Keen for sneaking into the truck and tagging along, it now felt more like a blessing in disguise.

Short of sticking his head out the window, he hadn’t been able to escape the fruity smell. What the hell did she do, bath in coconut oil? As they drove further south, the heat index rose, amplifying her scent. Warm air blew through the window. Myka released another button on his shirt, sweat rolled down between his shoulder blades. He glanced at the air-conditioner controls. A flip of the switch and he could aim the vent his way, blowing away Tee’s enticing odor while allowing him to revel in blessed cool air. He lifted his hand and dropped it.

Tee liked the heat, might actually need it. As a reptile shifter her core body temperature was lower than normal. He noticed at the house how she always wore leather or additional clothing. Sometimes he would watch the way she would stand in the middle of the yard and raise her face toward the sun for a few minutes from his bedroom window.

His gaze returned to the woman at the wheel, she was singing along with some song on the radio and bobbing her head to the beat. He could feel his cock getting hard and all he was doing was staring at her lips. By the supple way she moved them as she quietly sang the words, he could almost feel them traveling across his body. He wiggled in his seat and pushed the button to lower the window, forgetting the glass could move no further.

Huge cypress trees in the algae rich canals blurred as they zipped by . Every now and then he would catch a spume as something slipped back into the water. He was out of his element and far from the Smoky Mountains he called home. Myka wouldn’t discount the fact he was sleep deprived since he and Tee had decided to drive straight through to the little town she was taking him too.

The SUV they were using ate up the miles until the white lines that divided the highway connected to form one long, continuous streak. He wiped a palm down his face and realized he hadn’t shaved. Sweat dampened his hand and he wiped it across the leg of his jeans. Keen had given up his fight with the heat hours ago and tugged his T-shirt off. Tee took a tight turn and he slammed into the door. No longer on the interstate, they rode along a gravel road surrounded by swamp on both sides with no guardrails to protect them from falling into the water if they had an accident.

Keen leaned forward. “How much longer?”

Tee looked up into the rearview mirror and smiled. The tips of her incisors were just visible beneath her lips. “Not much further. Betaille is just up ahead.”

“Are there kids there?”

“Will they make fun of me?” He scooted back in his seat.

“What do you mean, little man?” She glanced at Myka, her brows knitted together.

Myka twisted in his seat. “I will eat anyone that teases you.” He snapped his teeth together and Keen giggled. Myka turned his head to look at Tee. “There were a few problems with other shifter children during the spring term of school.”

“Oh.” Tee made funny little movements with her mouth, looking at his nephew through the rearview mirror. “Keen, my cousins have had their own issues with ignorant folks. They welcome people without a care as to what they are or who they come from. Trust me when I tell you my kin is a little different.”

“Is there a problem?” Myka studied her expression and she looked less than enthusiastic about the trip.

“Why would I be surprised? Is there something you’re not telling me?” Discomfort slithered down his spine.

“Not exactly.” She tightened her grip on the steering wheel.

“Look, it was the only way I could get Aunt Sint to agree to talk to Uncle Percel.”

“How, Gertrudis? Exactly how did you arrange this meeting?”

She pressed her lips together, took another turn, and the road widened. Shotgun houses flanked them. A few people lifted their hands in welcome. Tee smiled and furiously waved back. She halted at the stop sign and a tractor drove by.

He could no longer resist and traced the curve of her check with his index finger. “Tell me.”

She remained silent and pulled off when the farm equipment was clear. Tee drove onto a winding dirt road and pulled to a stop in a cul-de-sac. She threw the door open and slid out of the driver’s seat. The back door was slammed and Myka glanced back to see Keen standing close to the vehicle, looking around him curiously. There were only a few vehicles parked in the clearing. Myka sighed and eased his door open. He stepped out and stretched. Laughter drew his attention to the four houses sitting on stilts that formed a half circle. Beyond the houses, he could see a hint of water. Between two of the houses children were rolling around in the mud. One child rose up from the middle and he was reminded of an old sci-fi movie.