Hey, it’s been a while since I had a chance to sit down and talk to you. Sorry about that but if you have a minute, lets talk.  Things have been moving fast and boy do I have a lot of news to share.  In January, I started a new series with Sugar and Spice Press, Pack Rulez, and the first book is Scar. Check t out below. 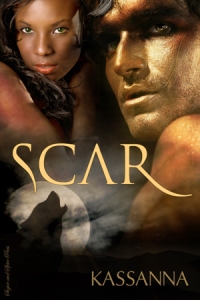 Rhys Blaidd is Alpha to the Volkshire Pack. He and his people have kept to the fringes of the shifter world, his clan a pack of sentinels, known as war wolves. When an attempt to kidnap his son pulls him back into the politics of the wolf packs, hard decisions are made.

Fre Niles is a stripper that saved a puppy from an irresponsible owner. Her one kind act has now thrust her into the shadowy world of shifters and thrown her between two rival wolf packs.

Protecting his people is paramount but one whiff of Fre’s scent and a taste of her body… To keep her he may have to start a war.

Coming May 7th, 2013 the second book in the series will release. Here’s the blurb.

Boris “Kuma” Blaidd was supposed to be Alpha of Volkshire. Instead he passed that mantel onto his brother and went looking for adventure as a sentential. He only came home at the request of his family to protect his nephew.

He never wanted a mate and didn’t expect to find her. Especially since she comes in a sexy, albeit skittish package and has had her car trunk retrofitted to keep a cache of weapons. Boris knows who she is and what he must do. He simply has to take a stroll through hell to accomplish the feat.

Nix’s life has never been easy but she has made it work one way or another. When the only person she has ever truly trusted called her,  she came guns drawn. Only she never expected to stay and she definitely didn’t expect to meet a hot bear disguised as a man who counters her every move with one of his own. Boris doesn’t play fair making her want things she knows can never be.

Now she wonders can they?

I am working on the third book, Fangs, but a release date has not be announced yet although it is slated for sometime this summer.  I’ll let you guess who that book is about… 🙂

In further news, I signed a new contract with Amira Press for a new series, Shifter Legends. I’ll be kicking of this new series with Rogue Dragon. I am so excited, I can’t wait to show you the book cover when I get it. In the mean time here’s the blurb.

Synda Supreme has known all her life she was a dragon…sort of. The love child of a human mother and dragon father, she’s maintained the secret, never realizing that her last name is actually a title.
Until she met another dragon.
Kirill Kavinkovy knew nothing of the woman he was sent to kill but one look at her and he kidnaps her instead. Unwittingly setting off a series of events that will change the dragon clans forever.
With her he could rule a nation.

So I touched base on my upcoming releases. Here’s a hint of what I’m working on. There are men in it and there are women and they are fly…ing, that is.  That’s all I can say at the moment. Right now I have quite a bit of rods in the fire and I am loving every minute of it. As usual hit me up I love hearing from you amazing folks. Here’s where you can find me and stay tuned I have goodies that I plan on giving away.

2 thoughts on “Hello from my writing closet…”