We love the holidays, we love making our readers happy and we love giving away swag. What better way to do that than to hold a blog hop?Here’s how it works… the more blogs you hop to (shown below) the more chance you have of winning prizes. Each site on the hop is offering a prize and Evernight is offering an iPad 2 as the grand prize! To be in with a chance of winning the site prize simply follow the blog you’re visiting and leave a comment which includes your email address. Each entry on each blog is then counted towards the grand prize draw. The more entries you have, the better your chance of winning that iPad 2! You also get extra points for liking the Evernight Facebook pagehttp://www.facebook.com/#!/evernightpublishing. Just make sure you let us know in the comments that you’ve done so.Happy hopping!
Hey Peep’s,
You have a minute? As Evernight mentioned above this is just one of your many chances to win a ipad mini, so get those comment in. They won’t be the only ones giving away a little something something. I have a special gift to give away to a lucky commenter to my blog. I’ll just call it a Christmas present and yes you will get it before Christmas.
So lets talk about presents.
When I was a kid I wanted any and every Barbie humanly possible to have along with all the accessories. I have to tell you I had a long list for Santa. I wanted the house, the cars, the apartment with the elevator, the pool, the dog with the long brushable fur and lets not forget all those outfits. After all my Barbie had to be in style.  When I say long I mean that list was epic. It’s also what probably secured my belief in Santa too because every year even if I didn’t get it all, I got a piece of that list and it was always a Barbie or Barbie themed.
One year it was just a Barbie coloring book and when I opened it up…sigh…it was the best present in the world. It wasn’t an expensive gift and years later I understood that at the time that was all my mother could afford but it was the best present ever because I could dress Barbie in any outfit my imagination could create. She drove any color car I thought was cute in my 8 year old mind. (Big Smile) Looking back, I was so giddy when I got it, running around to collect all my crayons right down to those tiny broken pieces. That one coloring book opened the door to my imagination. The door never closed and that is why I  treasured every sheet I colored. So happy to have it. Now tell me what was you favorite present of all time and when did you get it?
I would also like to mention I have some books I think would make really cool gifts. Take a gander below. Maybe you’ll find something to peak your interest and possible that of a friends. I also want to tell you every one of these book can be found on http://www.evernightpublishing.com/ and don’t forget to click on the link so you can experience all the other wonderful authors Evernight has.

Here’s the Blurbs to BOOKS 1 – 3
Whip Me Real Good
What do you do when and unexpected party shows you an unexpected lifestyle…and you like it?Club Lexx, 1Mattie couldn’t believe her luck…Not only had the Lexington Corporation agreed to fund her grant for the small organization she’d founded for abused women but she also received a complimentary ticket to the year’s hottest party. The Erotic Exotic Event. Mattie’s pleasure was two-fold. This was her chance to thank J. Lexington personally for choosing her little charity, and she could let loose a little from her stodgy persona to do it. She had no clue what she was in for.John was a strong believer of giving back to the community which was why he chose a non-profit entity to support every year. What he didn’t expect was the latte beauty, who looked like a librarian with the moves of a stripper, to come bounding through the club’s gold doors. When the opportunity presented itself, he snatched it with both hands.That’s when things really start to heat up.

Keep Me Satisfied
He would protect her at any cost.Club Lexx, 2Alexandra “Lex” Lexington is on the run. She thought she could handle the stalker that dogged her every step. Realizing how wrong she was, she sought the protection of her brother, John. New problems arise, namely John’s sexy security specialist, Adam Manchester. Buried desire for the infuriating man have risen to the surface and Lex institutes a plan of seduction that he’ll never see coming.But her stalker has found her again with deadly intentions.Adam Manchester handles John’s security for the Lexington Corp. He and John have been friends since childhood, and he knows the family well. Lex, she’s special, and not just to her brothers, but to him. Just not in a brotherly fashion. Now John is asking him to look after her while he’s away on business. Adam’s problem—how does he watch the woman that he desires to possess without acting on those long denied feelings?Be Warned: anal sex, sex toys, public exhibition.
Tell Me, Touch Me, Feel Me
He’d have her by any means necessary, even if it meant overcoming her secrets and cutting off his family.Blurb:Luther Lexington didn’t question why his brother sent for him, but
knowing John, he was sure he had his reasons. What he didn’t expect
was to find a mocha beauty, in the guise of security personnel that
threw her fists first and asked questions later. From the moment she
laid him low, he wanted to get her lower, as in under him.Tanya Babineaux did what she was supposed to do as a Club Lexx
security guard. Make trespassers leave by any means necessary. How was
she to know he was the owner’s little brother? Now he corners her
every chance he gets, and she doesn’t have time to play.Tanya harbors a secret, and if Luther didn’t stop chasing her…in the
end she could lose it all. That is, of course, if his brothers don’t
ruin everything first. 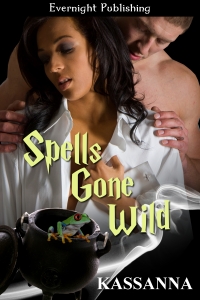 Spells Gone Wild
What would you do if you accidentally turned someone into a toad?Blurb
Kezia Smythe is a newcomer to Jaded Falls. The townsfolk don’t like change, and they’d definitely not approve of her being a witch if they found out.Doreen Dineen is the worst of the bunch, going against her at every turn. It doesn’t help matters that the woman’s son, Dominic, asked Kezia to marry him. She does her best to avoid her future mother-in-law.When she accidentally turns Doreen into a toad…well, she’ll just have to turn her back. If only she knew how.

Make It Happen Captain
Cyn Fuller needed a get-away. She hoped to escape the usual family drama by taking a cruise over Christmas and was looking forward to the experience of a lifetime.

Her vacation wasn’t one she expected…the single’s cruise would have been perfect for her grandmother. Cyn was stuck for four days traveling with the geriatric crowd and fending off indecent proposals buy much older men that popped Viagra like Pez candies.

Marcus Nickels was the youngest man in the fleet to ever be appointed captain. He took his job seriously and the Christmas holidays were simply work days. That is until he rescued a mocha beauty from the clutches of a very persistent elderly gentleman while in port.

After he saw her on deck, Christmas became a holiday to be celebrated and Marcus devised a plan of seduction guaranteed to make their cruise unforgettable

53 thoughts on “We are having a hopping good time at Evernight! Welcome to the fun!”